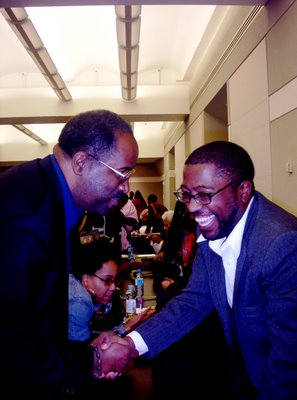 From Doo-Wop to Hip-Hop: Interview with two generations of African-

Afaa Michael Weaver, 58 and Major Jackson, 40 are two major AfricanAmerican poets from two different generations, but they both continually feed from their shared heritage, and the continuum of the Black experience in America. Weaver, a professor of English at Simmons College in Boston, a recent Pushcart Prize winner, and the author the critically acclaimed poetry collection: “ Plum Flower Dance” (U/Pitt), and Major Jackson, the authorof “Hoops,” an asst. professor at the University of Vermont and a core faculty member at the Bennington Writing Seminars, met for a filmed discussion at the Somerville Community Access TV studios. The show was moderated by GloriaMindock (Cervena Barva Press) and produced by Doug Holder (Ibbetson St.Press).

Weaver started off the discussion by going back to his native Baltimore in 1970. This was a time when he dropped out of the university, got a job at a steel mill, and started to pen his seminal poems. Later he joined the military,married his first wife,but was destined to live a radically different life than his early years indicated.

Jackson was born in Philadelphia, and studied to be an accountant. He got an internship in which he was spending up to 80 hours a week with spreadsheets. After college he worked at an arts center in the city in the role of finance manager. He said: ” I was happy when I was fired.” He had taken some poetry courses in college, and he started to program poetry events at the center. He soon realized it was the arts that touched him spiritually, and he eventually made poetry a part of his everyday life.

Weaver talked of his early days in East Baltimore in the 50’s and 60’s. He sort of free- associated about mowing grass with push lawnmowers and the rituals of his youth, like using toothbrushes to clean his shoes before a night out on the town. Weaver said: “Baltimore was a very Southern city. We weren’t allowed to shop in the stores in downtown Baltimore—the line between black and white were clearly drawn.”

Weaver said his father’s family was from Southern farming stock, and his dad had the philosophy that “ Children should she be seen not heard.” Weaver learned to become an “isolated” learner, he recollected. In 1963 he was bused to a white school, which caused a great deal of anxiety for the young poet. It was hard to be in a place where he was not welcomed. He was always glad and relieved to be back on his own side of town. At the time his scope of experience was limited. He thought the whole world was Black. Weaver laughed: “I watched “ Leave it to Beaver,” and thought that family was just like mine, except they were white.”

Jackson said even though Philadelphia was north of Baltimore, it still possessed a Southern sensibility. This was confirmed when he spent his summers in Nashville, Tennessee as a boy and he experienced the same “rhythms” as the South.

Jackson described himself as a hyper-aware kid. He was tuned in to the music and the culture of the time. Hip- Hop started to appear in 1978-82, and drugs started appearing in the mix. There was a potent combination of rich culture and tragic lives. He sadly watched the erosion of his neighborhood over the years.

Jackson’s work is informed by his observations of people trying to survive under extreme stress. Anything that cuts humans down, be it in an urban or rural setting, will find room in his work, he said. All in all Jackson is grateful to have grown up in Philadelphia. He had an appreciation of the speech, jargon, and music of the milieu.

Jackson reflected on his neighborhood:” People all knew each other. The guy at the corner drug store and the drug dealer on the corner.” Jackson knew who to avoid and who could act as a role model.

Weaver brought the discussion back to the pivotal year 1968. This was theyear Martin Luther King was assassinated. Weaver’s younger siblings were born in 1969 and 1973. He said he was able to see the effect the legacy of those years had on them, and how it changed them. Weaver vividly remembers his mother crying like a proverbial baby when MLK was shot. Weaver went further back to the 1965 riots in Baltimore. He remembered the intrusion of the National Guard in his neighborhood. He can recall whites roaming the streets looking for blacks to beat up. He remembers hearing gunfire from his two- story row house. Weaver said:” It was horrifying. The cities never recovered from the 60’s—and later they became plagued by drugs. The post-industrial era brought the loss of blue-collar jobs. Crime flooded the community.”

Weaver reminisced about the downfall of Milton Ave, where he grew up. Blockbusting tactics by real estate developers drove whites out. The patterns of parenting changed. There were more divorced parents. The old family structure fell. More men of color were incarcerated.

Weaver eventually left the steel mill and worked for Proctor& Gamble. Once,while driving to work he took a route down Milton Ave. with a friend and saw a man shot down dead. This really hit home as to how the times had changed.

Jackson said that music had a decided influence on him and his work. On one hand he celebrates the music of Elvis, but realizes the roots of Rock’n Roll is with the Blues, which was African-American music. He was introduced to black history by an aunt who gave him a history book that traced the long list of accomplishments of the black race through the centuries. He learned about celebrated African Americans like Robert Hayden, poets Gwendolyn Brooks,Langston Hughes as well others. He also loved the music of the 60’s like James Brown and his anthem of a song “I’m black and I’m proud.”

Weaver said the “big book” when he was growing up was the bible. He had a recent discussion with the poet James Tate, who also touted the influence of the “good book.” Later his mother bought encyclopedias from the supermarket for 25 cents a piece. As for the Blues, it came naturally. The cadence of his father’s speech was very Blues- like, Weaver said. Weaver loved the Temptations, The Supremes, The Impressions and other groups of the era. He wore highbrow collars, there was “ a soundtrack to my life” he smiled. Hip-Hop hit the scene when he was 30 or so, so he was able to appreciate it.

Weaver talked about the changes in the culture due to the turmoil in the cities. He said the parlance of the Black man changed. The language used was of the type that would not be tolerated years before. The Civil Rights Movement opened up what was an essentially insular black society. From this instability came Gangsta Rap, and the idolization of the drug culture.

Jackson, through his elders, was exposed to the music of the 60’s. He used to listen to a radio show hosted by “Butterball” that played that genre of music. Books were ubiquitous in his household. His grandmother built a sprawling library in the home from used books that she bought. Literature was important. His stepfather’s sister worked at the Philadelphia Museum of Art,and Jackson recollected: “ I made it my playground” He had the images of Duchamp, Lichtenstein, and others seared into his nascent consciousness.

His grandfather had a deep appreciation for African-American music, and his grandmother loved Gospel. He got to see the great vibraphonist Lionel Hampton with his grandfather. He had a piano in his house, and he too had a soundtrack to his life.

Jackson said the avant-garde musician Sun Ra lived a few blocks away in Germantown. He said: “: You could hear his group play—unlike anything I heard before. It was free jazz, a big band sound, way outside the norm.”Jackson said he appreciated Sun Ra’s journey, a man who created this

mythology of the musician as an alien being. Both poets agreed that mythology that artists like Sun Ra draped around themselves was a reaction to a world that rejected them and made them suffer. Sun Ra, and others of

his ilk didn’t want to be part of a society such as this, and in effect divorced themselves from it.

Finally both men talked of mentors. And it was clear without mentors these men’s lives would be quite different. Weaver defines a mentor as” A friend who reserves the right to tell you what to do.” Jackson mentioned Amiri Baraka and Sonia Sanchez as well as Weaver, as major influences in his writing life.

Weaver talked about the poet Lucille Clifton who advised him to read X.J.Kennedy’s “Introduction to Poetry” and gently criticized and encouraged his fledgling attempts at poetry. Both men are now in positions to give something back, and they do it as teachers, and in other roles. And hopefully, new generations will flow back and forth and nurture each other, like they have with Afaa Michael Weaver and Major Jackson.